Why does trans still have to be so tragic?

Why not tell stories that insist that there isn’t anything wrong with being trans instead of again and again obsessing over the things that you, the people not living our lives, imagine are hard for us?

Since The Danish Girl started showing in Danish cinemas since the 4th of february, a discussion about trans representation in media has been sparked on more public channels. Here is a translation of Elvin Pedersen-Nielsen's input, which was originally published in Politiken on february 5th.

The first film I saw about another transperson was ‘Boys Don’t Cry’.
It tells the story of an American teenager who was raped and murdered after a group of men found out he was trans.

The next film I saw was ’Ma vie en rose’, about a child that insists on wearing dresses and is so badly treated by her family that she closes herself into a freezer and seals the lid.

With few exceptions, most other films with central transgender characters follow the same theme: somebody comes out as trans, things are fine for a hot second – and then all hell breaks loose. Everyone who used to love them disappears, there’s at least one and preferably multiple scenes of violence or rape, all hope fades, melancholic music abounds, and so often the whole thing wraps up with the transperson dying or being murdered.

The latest, and thus far most acclaimed addition to this trope is Tom Hooper’s major Hollywood drama – ‘The Danish Girl’.

I don’t know what others get out of the film but personally it made me sick to my stomach. As a painter, Einar is the main character enveloped in success and love. But as a trans woman, Lili is persecuted by straight jackets, loneliness, and violence. When the film inevitably concluded with her death I was left with the question that most representations of trans instill in me:

Why does it always have to be so hard?
Why must we watch so many beatings on film and TV?
Why is it impossible to imagine that a life like mine could be happy?

The film is based on the life of Lili Elbe. Clearly the world was a different place in the 1920s. There was no internet, no famous spokespeople like Laverne Cox, and the only literature available focused on split personality disorders and perversity. The film could have set itself apart from clamoring examples of how it’s impossible to be a happy trans person simply by showing joy in breaking gender norms. Instead of tragic close-ups of crying Lili and her crying partner, the film could have spent time investigating the society that was making them cry. Perhaps then it could have been a film about our transphobic society instead of a prettily filmed two-hour rolodex of transphobia.

Maybe that’s too complicated a story? Maybe broadly relatable drama sells more tickets and Lili, like all other norm-breaking outcasts before her, must be dragged through emotional mud before she dies. Maybe the film isn’t made for transgender people to see themselves as whole and lovable. Perhaps it’s actually made for people who aren’t trans so they can go home and think, “Wow, I’m sure glad that’s not me”.

There are far too many reasons why trans youth are four times more likely to kill themselves than cis youth. A first step could be to take a look at what film and media tell us about the options for our lives. Not all representation is good representation.

Many of us who live on the edge of norms know all too well how important (and rare) it is to see ourselves represented respectfully and honestly.

What I didn’t find in film and TV as a youth I have been lucky enough to find in other transpeople as an adult. I have learned that my feelings of discomfort are not just a part of living but rather a sign that I should break from the norms that surround the gender I was assigned at birth. For those who aren’t lucky enough to meet such lovely people, representation in film and TV can mean the world.

I hope that the directors, organizers, and journalists who suddenly seem to see trans people as exciting material remember that representation is power. Yes – it is hard to be transgender in our society and that should be discussed. But when you do it, might you ask yourselves who makes it hard and why?

Perhaps then you will gaze back on your own prejudices about what a happy life looks like and who should have access to it. Why not tell stories about everything gained from breaking out of the roles we impose on people– instead of everything one might lose? Why not tell stories that insist that there isn’t anything wrong with being trans instead of again and again obsessing over the things that you, the people not living our lives, imagine are hard for us?

Continuing to tell the same tragic stories of violence and death only worsens something that is already quite tough in the first place. 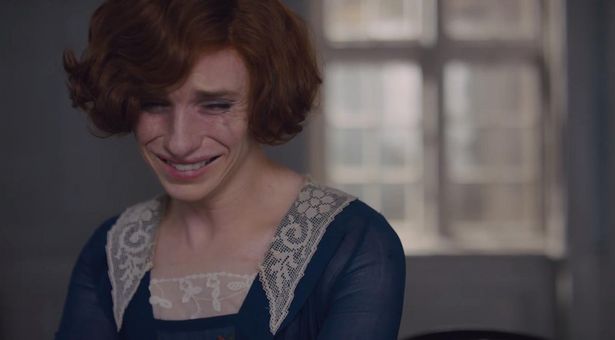 Image: Eddie Redmayne imagining how tragic it must be to be trans.

Did you learn something from this article? Did it make the world a better place?
We collect funds to run the site through patreon.com/killjoydk.
If every other returning reader donated just $1, then we could afford a part-time journalist.

Would you like to stay updated with the newest articles from killjoy.dk?
Sign up for our e-mail service for free and get automatic notifications.

As a Danish trans woman, ‘The Danish Girl’ makes me feel ridiculed

Blockbuster ‘The Danish Girl’ has been praised for taking up trans issues in a major Hollywood production. Unfortunately, this film is just one more in a long line of tragic, stereotypical portrayals of trans experience. Laura Tams wrote a danish review of the film for Alt for Damerne.

Transgender activists invite themselves to speak at IDAHOT 2015

Originally only cisgender speakers were invited to IDAHOT – The International Day Against Homophobia and Transphobia but two transpeople invited themselves up – with backing from the event’s planners, Copenhagen Pride.